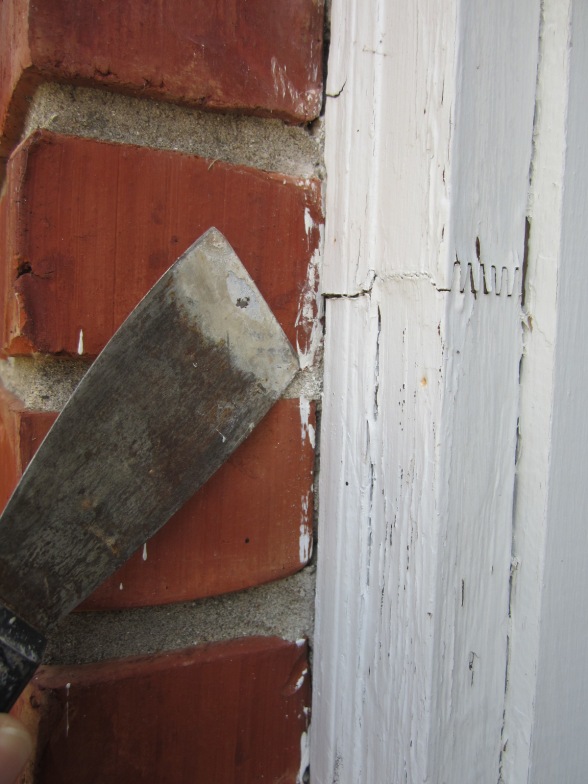 Every day when I pulled my car into the garage, I cringed at the old, dried paint slopped onto the brick surrounding my garage door trim. The paint was out onto the brick by at least an inch in several places, and ran from the top of the door all the way to the ground. At least whoever did it was consistent.

Although I’m grateful to have a garage to park in and really shouldn’t complain, I paint for a living, and that made the situation especially painful. I had a hard time getting past the thought that it would have been real simple for the perpetrator to slap up a piece of tape onto the brick to protect it and save me some grief.

But the damage had been done, and since I’d hired someone to replace the rotting trim that you’ll see in the photos, it was time to put on my big girl panties and get to work. Procrastination time was over.

I must confess that I’d been avoiding this project because I didn’t have a lot of confidence that the paint was going to come off. It had been baking in the summer heat, and had prevailed through Central Illinois winters for at least two years, showing some kick-butt stubborn endurance.

So here’s how I got rid of the old paint. This is the product I used to get started.

I also used a scraper, safety glasses, a rag, and the Mother of all handy tools—my Dremel. If you don’t own one of these little gems, you must buy one. Really. I use it all the time. It’s also worth spending a few extra dollars to buy a cordless one.

I put some Oops! on the paint first. It’s the consistency of water, so keep that in mind if you use it. I managed to get it on my hands a couple of times and it didn’t bother my skin, so that was a plus.

Next I did minimal scraping just to get the thicker chunks of paint off. After scraping, I tried using a wire brush. It removed the paint, but it also turned the scrubbed area gray so I ditched that idea.

After deciding I didn’t like using the wire brush, I put on my safety glasses (of course), and starting using my Dremel on the softened paint. My brick isn’t real porous as far as brick goes, and it worked like a charm. The reasoning in using the Oops! and doing some scraping first was that I didn’t want to “goo” up my grinding stone with excessive amounts of paint.

Since I was desperate, I decided that even if it left a different color behind, I didn’t care. It was better than white globs of paint. You can see that the area right next to the white trim (in the photo below) where I used the Dremel looks lighter.

Unfortunately, I didn’t decide to blog about this until I had already finished the worst side of the garage, so the pictures I have aren’t as dramatic as the earlier brick I cleaned, but you get the idea.

Here are the before and after photos.

I can’t imagine doing this on a large expanse of brick, but for smaller mishaps it works pretty well.

Now I can smile when I put my car away, and I’ll be smiling even bigger when the rotted trim has been replaced!

This post was written by Tracy Evans who is a Journeyman Painter and Certified Home Stager/Redesigner. If you enjoy gardening, you may want to visit her gardening blog at MyUrbanGardenOasis.Wordpress.com.

Thank you for joining me! The purpose of this blog is to encourage people like you to try new projects that'll make you fall in love with your home, and make your life a little more organized and beautiful.